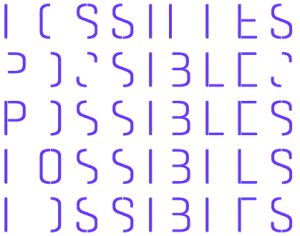 Possibles not only open up an unfinished world of futures before us, but also presents and pasts behind us. The Possible is openness and movement, a horizon of change that unfolds and organizes the world. The Possible started with the polis, the city, and is political by definition. The Possible has nothing to do with the unreal, the impossible, or the fictitious, but rather with the unfinished real in front of us. The Possible shapes our reality, and that is precisely why it is a political problem in itself. From “everything is possible” to “be realistic and ask for the impossible”, from an “infinitude of possible worlds” to “this is not possible and cannot be done”. Sometimes we are trapped in a world of pre-designed Possibles – “this is it” –  where it seems that nothing could have been left out, there are no alternatives. Sometimes it is living an illusion of freedom in an impossible world where the critical just disappears. How to open towards contingency, not only to the becoming but also its uncertainty? How to draw new Possibles to come, and not just confirming those that are there waiting to be confirmed, experienced and thought, as Possibles that can be brought to existence in our worldview? How to move from the impossible, the fable or the utopia to directly bite into our reality? The Possible is inscribed within the arts, design, sciences and technologies that surround us now and those yet to come. We see these Possibles behind climate change and global warming, behind robotics and biotechnologies, inside algorithms, artificial intelligence and data science, in between quantic worlds trying to get a grasp of what matter is, up there above our heads in outer space and the multiverse.

What does it mean to be a human now? How do we relate with non-humans? How do we become bodies in the world? How do we construct and gain knowledge? How should we develop the interaction between human and machine? And with other animals?

These are some of the questions behind this sub-theme, which focuses on the possible humans and non-humans that we are, redesigning ourselves and the things around us through new perspectives that open up these Possibles in an unfinished world that shapes our existence.

How do we understand and experience life nowadays? How do we relate with nature? How should we fight against climate change and global warming? How do we transform and inhabit our world? How would we inhabit the other worlds that we long to discover and experience? And what about the universe, outer space and the planets we dream about?.

In a context where all Possibles seem to be closed to us as we head towards a dystopian future, it is crucial that we try to open these Possibles waiting to unfold, to be thought about and to be experienced as the Other to come.

What is history’s role? How can we construct our futures? What is the role of the arts in this context? How should we care for our past and heritage? What to remember and to forget when there is so much information available? How can we create meaning and sense in a world overflowing with data?.

The way we conceive of our past, memory and history structures our present and creates our future. Starting with digital oblivion and technological obsolescence, this sub-theme moves forward and backward through an archaeology of media that suggests possible futures and heritages.

How to experience and learn from inter/multi/trans/anti-disciplinarity? How to integrate the arts into science and technology and the other way around? Which experiences need to be shared to reinforce that connection? How and why is there a need to congregate around events such as festivals or conferences? What can we learn from this? What experiences from art and design production and research centres and programmes do we need to be familiar with and replicate?.

These are some of the questions that stem from the relationship between education and society, that place where citizenship comes to be and interlaces with the rest.

The series of ISEA symposia is coordinated by ISEA International. Founded in the Netherlands in 1990, ISEA International (formerly Inter-Society for the Electronic Arts) is an international non-profit organization fostering interdisciplinary academic discourse and exchange among culturally diverse organizations and individuals working with art, science and technology. ISEA International Headquarters is supported by the University of Brighton (UK).
CONTACT:

We use cookies in order to better understand how this site is being used. By continuing to use the site, you agree that is OK. Learn more.